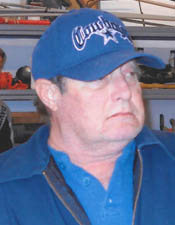 Donald Edward “Dee” McDaniel, 62, of Dublin, passed away Sunday, February 9, 2014. He was a veteran having served in the U. S. Army. He collected guns and coins, and carried on his brother’s legacy as a cattle farmer on their property known as B & D Farms. He was preceded in death by his father, Samuel Edward McDaniel, and his brother, Robert H. “Bobby” McDaniel. He is survived by his mother, Bonnie Hite Price of Radford; his fiancé, Mary Austin; and several other family members. Funeral services will be held Friday, February 14, 2014 at 11:00 am at the Mullins Funeral Home in Radford with Rev. Don Shelor officiating. Interment will follow in West View Cemetery where members of VFW Post #776 will conduct military graveside rites. The family will receive friends from 5:00 pm until 7:00 pm Thursday evening at the funeral home. In lieu of flowers, the family requests that memorial contributions be made to Central United Methodist Church, 803 Wadsworth Street, Radford, VA 24141. The McDaniel family is in the care of Mullins Funeral Home & Crematory in Radford. www.mullinsfuneralhome.com