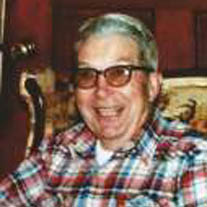 Morell Julian McCroskey, 95, of Curve Road, Pearisburg, departed this life at Carilion Giles Community Hospital in Pearisburg, Wednesday afternoon, January 27, 2016, after a long and blessed life. Born at Interior, Giles County, on January 8, 1921, he was a son of the late William McKinley and Mary Elizabeth Wood McCroskey.

He was a veteran of the U S Army, WWII, was a member of the VFW Post 6000 in Narrows, and a member of Pearisburg Lodge 106 AF&AM. He was preceded in death by his parents, his beloved wife Clara Beckner McCroskey, his son Morell Lee McCroskey, his sisters Ruby and Lorraine McCroskey and his brothers Russell, Clinton, Eugene, Edward, Kenneth and Douglas McCroskey.

Funeral services will be conducted Monday, February 1, 2016, at 2:00 pm in the Kendall Funeral Home, 605 Snidow St, Pembroke with Pastor Shahn Wilburn officiating. Burial will follow in Birchlawn Burial Park in Pearisburg. The family will receive friends at the funeral home, Sunday evening from 5 until 7 pm. The family respectfully requests that memorial contributions be made to Riverview Baptist Church. The Kendall Funeral Home in Pembroke is in charge of arrangements. Online condolences may be sent by visiting kendallfuneralhome.com. 540-626-7221.