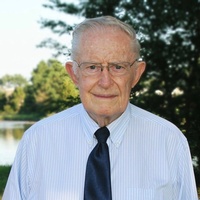 Samuel George McCracken, Jr. was born in Boston, Massachusetts on May 6, 1929 to Sam and Eva McCracken. He the first of two sons. He graduated from Boston Technical High School in 1947 and went to work as a machinist for Walter Baker Chocolate Company.

Sam was drafted into the army in 1953. Most of his time in the military was spent at Fort Hood, Texas. Sam met many friends during his time in Texas and always remembered their kindness with appreciation. After his discharge Sam worked with his father at McCracken Auto Repair until entering the ministry in 1959.

During his years in the ministry, Sam labored in New York, New England, South Carolina, North Carolina, Tennessee, Virginia, Maryland and Delaware. He was known for his quick wit and humor, but above all for his deep compassion and kindness toward others. There was a special place in his heart for the young, for the aged, for the sick, and for the struggling. Sam especially loved children, and children loved Sam.

Sam died peacefully on October 9, 2018 in Blacksburg, Virginia. He was predeceased by his parents and by his brother John. He is survived by his sister-in-law, Ernestine; nieces Linda, Maureen and Laura; grandnieces and grandnephews Kayla, Annaliese, Jonathan, Connor and Karina; six great-grandnieces and great-grandnephews; several close cousins; and many loving friends and coworkers.