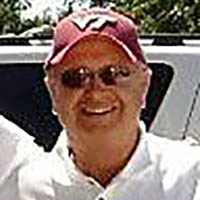 He is predeceased by his brother, Edward Kent McCoy. He was retired from Turf Research Center Virginia Tech with 39 years of service. He was a member of Level Green Christian Church in Craig County and a man of loyalty to his family. He was also an avid Virginia Tech and Dodgers fan.

Funeral Services will be conducted Monday, September 19, 2016 at 11:00 am in the Level Green Christian Church with Pastor Jim Bane officiating. Interment will follow in the Williams Cemetery.

The family will receive friends from 10:00 am until service time at the Level Green Christian Church, 3388 Cumberland Gap Road, Newport, Va 24128. In lieu of flowers a memorial contribution may be made to the Williams Cemetery or Karen McCoy 1315 Spruce Run Rd, Newport, Va 24128.