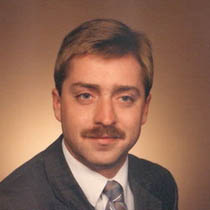 Bradford Craig McCormick, 54, of Radford left his mother’s arms on Thursday, March 17, 2016, and into the arms of Jesus to be presented to God and is now safe and pain free with his new glorified body.

He worked at Federal Mogul for 25 years before retiring due to diabetic complications.

Each of us have been touched and blessed with the brilliant mind of Brad in some large or small way.

There will be a private Memorial Service officiated by Pastor Bobbie Henley.

Arrangements with Horne Funeral Service. Online condolences may be left by visiting www.hornefuneralservice.com