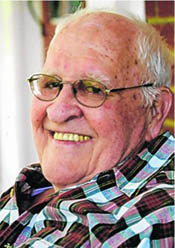 Charles Allen McClaugherty, 92, of Narrows, passed away Monday, May 19, 2014 at his home. He was born in Narrows on June 23, 1921, and was the son of the late Charles Peck and Harriett Carr McClaugherty. In addition to his mother and father, he was preceded in death by his wife of 59 years, Hettie Lou Coburn McClaugherty; two brothers, Harry McClaugherty and Frank McClaugherty; a sister, Helen Jones; a son-in-law, Ron Johnson; and a great-grandson, Jake Stafford.

A graduate of Narrows High School, Allen graduated from Virginia Tech, where he played football. He also served in the United States Marine Corps during World War II. He taught and coached in Luray, Virginia before coming home to Giles County, where he taught and coached football for 43 years, most of those at Narrows High School. He was raised on the family farm on Wolf Creek near Narrows, and later lived proudly in his hometown. Allen enjoyed gardening, and had a vast knowledge of farming, which he joyfully shared. A longtime loyal Virginia Tech and Narrows Green Wave fan, he was a mentor to numerous students over the many years that he taught and coached. Along with Hettie Lou, he held family close and dear, and enjoyed reunions and birthday events. He leaves a legacy of service to God, Country, and Community.