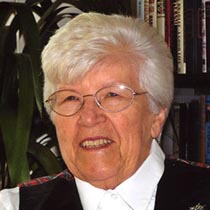 Betty Jo McCarthy, 92, died on Wednesday, June 22, 2016 at Showalter Center in Blacksburg, Va. with the sun and the moon at her back and her family gathered. She was born in Muskogee, Okla., the third child of Eula Reona (Tyree) Hill and A. D. Hill.

She and her five brothers and sisters grew up during the Great Depression with dozens of cousins. After finishing high school, she received an unexpected scholarship to attend Oklahoma College for Women, graduating with a B.S. degree in Biology. She took an ornithology class during this time and feeding and identifying birds remained an interest all her life.

After college she worked as a chemist for Anderson Prichard Oil Corp. and later for the US Bureau of Mines in Bartlesville, Okla. where she met and married Donald O. McCarthy of Nebraska City, Neb. Several years after stating she would never move east of the Mississippi, they moved to Kentucky where her daughters were born, and then Illinois where her son was born. They continued to Connecticut where they raised the family, and in later years moved to Ohio, Pennsylvania, and Virginia.

Betty Jo went back to college at Wright State University in Ohio when she was 52, where she was one course short of completing a degree in Fine Arts when they moved again. She created a 14-box bluebird nesting trail at White Horse Village in Newtown Square, Pennsylvania, contributing research data to Cornell Lab of Ornithology while in her 80s.

She was an accomplished quilter and skilled artist with an eye for color and beauty which she shared generously with family and friends. She enjoyed camping, hiking, gardening, genealogy and traveled extensively in North America. She had great capacity for finding joy, deeply loved her family, offered kindness and empathy to those around her, and lived life with good-natured humor and grace.

A memorial gathering was held by immediate family.

Contributions in her name may be made to the Southern Poverty Law Center, 400 Washington Avenue, Montgomery, AL 36104.