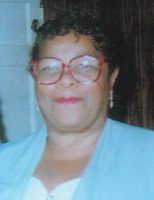 She is also preceded in death by her sister, Brenda Gordon-Wright, husband Marion “George” Mayweathers and three sons, Gerald, Anthony, and Vincent.She attended public schools in Bayonne, New Jersey. She then married Marion Mayweathers. She began working as a linen presser at a warehouse in her hometown of Bayonne. Later she moved to Charleston, South Carolina to begin work at the Naval base where she was a food preparation worker.

Patricia is survived by her beloved siblings, Lawrence Gordon, Joyce (Gordon) Bailey and Doris (Gordon) Bratton; her children, Jean, Juanita, Dianna, Christopher, Mark, Rhonda, Gary (wife Robyn), Patricia, Watumbe, Doris (husband Rodney) and Kimeca. She is also survived by numerous grandchildren; and great-grandchildren, as well as a host of other relatives and friends.

Funeral Services will be conducted Wednesday, July 1, 2015 at 2 p.m. in the McCoy Funeral Home Chapel. The family will receive friends from 1 to 2 p.m. prior to the service.