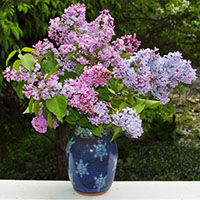 Miss Lelia Thompson Mayton, 70, of Blacksburg, Va., died in a Richmond hospital on Sunday, July 11, 2010, of cardiac arrest, following four months hospitalization for complications of cancer surgery. She was a retired Virginia Cooperative Extension Service home economist. She was born in Crewe, Va., on March 21, 1940, and was the daughter of Joseph Herbert Mayton and Gertrude Green Mayton who predeceased her.

She served in Appomattox County for seven years, then transferred to Montgomery County where she served for more than 25 years, retiring in 1996. During her career she touched the lives of hundreds of Virginia residents through 4-H and home demonstration clubs, as well as extensive professional contacts.

Following retirement, she traveled extensively and participated in numerous civic and charitable activities in the Blacksburg area. She served for many years as President, Haymarket Square Homes Association. Miss Mayton was an accomplished artist, especially focusing on rural scenes and horticulture. She was a devoted Virginia Tech Hokie fan, enjoying season tickets for football and men’s and women’s basketball for many years.

Funeral services will be held 2 p.m. on Saturday, July 17, 2010, at Crewe Baptist Church with the Reverend Doctor Ben Powers, pastor of the Crewe Baptist Church and the Reverend Christopher Cunningham, rector of Johns Memorial Episcopal Church, Farmville, Va., officiating. Her body will lie-in-state at Crewe Baptist Church for one hour preceding the funeral service. Burial beside her parents and grandparents will follow at the St. Mark’s Cemetery in rural Nottoway County, south of Crewe. A memorial service will be held in Blacksburg at a later date for her friends, professional and Virginia Tech associates.

Memorials may be made in Miss Mayton’s honor to Virginia Tech or to the Crewe Baptist Church. Arrangements are by Jennings Macmillan Funeral Home, Crewe, Va.