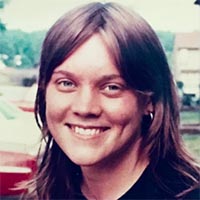 She married her husband George the day before her 20th birthday, settling in Blacksburg in 1977 where she and George raised two children and built a community of friends, neighbors, co-workers, and fellow parents that brought innumerable moments of joy to Suzan’s life.

Suzan earned a Bachelors degree in Geology from Georgia State University and in 1977 moved with George to Blacksburg to continue her education at Virginia Tech, later earning a Masters degree in Education. Suzan spent more than 30 years teaching science to eighth graders at Blacksburg Middle School, earning National Board certification. Suzan also worked as an adjunct faculty member at Virginia Tech and participated on several research projects with Virginia Tech faculty focused on technology and inquiry-based teaching. Following her retirement, she was active with the Lifelong Learning Institute at Virginia Tech.

Suzan was an avid reader of all subjects and part of a monthly book group with friends that she loved dearly. She enjoyed traveling and held a special affinity for annual family vacations at Holden Beach, North Carolina. Most of all, Suzan enjoyed spoiling her grandchildren (and less often her children and her husband), planting and cultivating flowers in her beautifully landscaped backyard, and entertaining friends at dinners.

She was preceded in death by her parents, her mother-in-law Margaret Vandiver Mauney, father-in-law Edwin Ware Mauney and his wife Roberta Mauney.

A memorial service is scheduled for Saturday, October 26th at 11am at Blacksburg Presbyterian Church, officiated by Rev. Dave Cozad. The family will receive friends immediately following the service in the Church Fellowship Hall. In lieu of flowers, the family requests that donations be made to Sojourn Center, PO Box 295, Blacksburg VA 24063.