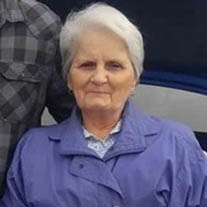 Annabella Mattoni, 75 has passed August 12, 2022 formerly residing in Roanoke Va, and was raised in the roots of West Virginia. A woman strong and proud the matriarch of the family raised and provided for the family through her entire life. Bell always put the wants and needs of others above her own. She would do anything to take the weight and worries of others and add it to her own. She will forever be remembered in the many few that have been left behind.

Those who preceded before her death, her loving husband Gino Mattoni. Harry and Shirley Jones her parents, Preston Jones her youngest brother, and her son in law Gregory Long. The ones who have survived Annabella is her daughter Gina Long, grandchildren Ashley and Austin Long; great grandchildren Aiyanna Gore and Sophia Bradshaw; brothers, Harry ‘Sony’ Jones and wife, Violet along with Edward Jones and wife, Daisy; sister-in-law, Linda Jones Nichols; a niece; and several nephews.

Abiding by Mrs. Mattoni’s wishes there will be no formal service.