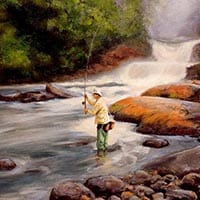 John David Matherly, age 46, of Newport died, Saturday, March 20, 2021, at Roanoke Memorial Hospital. He was born in Martinsville, Va. on June 27, 1974. John loved his dogs, Buddy, Bella, and Dixie. He was an avid fisherman, hunter, and outdoorsman.

He was preceded in death by his father, Louis Wayne Matherly. He is survived by his mother, Kathy Ann Dew, maternal grandmother, Vera Dew, brother and sister-in-law, Joshua Andrew and Jonli Matherly, nephew, Colton Andrew Matherly.