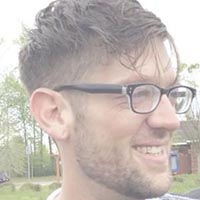 Eric John Masterson left this Earth most fittingly on Ascension Sunday, May 24, 2020. Eric was 33 years old.

Born into a military family on April 20, 1987, Eric’s first two moves (N.J. and Okla.) happened before the age of one. His first four birthdays were spent overseas in the Bavarian region of (formerly West) Germany… followed by a life of exploration that included living in Alabama, Arizona, Kansas, New Jersey, and his final resting place, Virginia.

He was preceded into heaven by his grandfather, John Aaron Masterson, and his cousin, Aaron Stephen Masterson, son of Don and Sara.

No donations are being accepted, but the family asks that you support the charity of your choice.