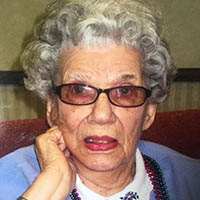 Louise McNeely Massie, 94, of Pulaski, passed away Sunday, September 20, 2015 at Kroontje Health Care Center in Blacksburg. Born February 18, 1921, she was the daughter of the late Berchal Lee and Blanche McKain McNeely of Cassatt, SC.

Louise graduated from Camden and Kershaw County Memorial Hospital School of Nursing in 1942. As the strong, independent woman that she was, she accepted a job at Pulaski Hospital. While working there she met and married Tom. During her years at Pulaski Hospital, she was Director of Nursing and OB Supervisor. She assisted and delivered many babies in the Pulaski area. She left nursing in 1974 to move with her husband to Cayce, SC. She returned to Pulaski in 1984 after the death of her husband. In her retirement, Louise volunteered for many years at the hospital.

A graveside service will be held at 11 a.m. Wednesday, September 23, 2015 at Thornspring Cemetery followed by a memorial service at Christ Episcopal Church at 12:30 p.m. This will be followed by a reception in the Parrish Hall of the church.

In lieu of flowers, the family requests donations be made to Christ Episcopal Church, P.O. Box 975, Pulaski, VA 24301, or to the charity of your choice.

Stevens Funeral Home in Pulaski, VA is in charge of arrangements.