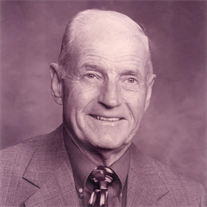 Madison was a devoted husband, father, grandfather, and great-grandfather who was lovingly called “Opa” by his grandchildren. He was preceded in death by his daughter, Juliana MacLachlan Marye. He loved the small communities of Shawsville and Elliston where he grew up, and his passion was his beautiful wife Charlotte, and his farm.

Madison, an iconic personality to his family, had an absolutely wonderful life filled with adventure and service; to his nation as a Soldier for 20 years, and most beloved state, The Commonwealth of Virginia.

As a young man, Madison heard and read of Germany’s invasion into Poland on September 1, 1939, which marked the beginning of World War II. As a result of the Japanese attack on Pearl Harbor, Hawaii on December 7, 1941, the United States entered the War. Madison joined the United States Army and began his military career as a private at Camp Shelby, Mississippi assigned to the 65th Infantry Division. He deployed to combat in Europe as a machine gunner, and earned the Combat Infantry Badge as a 19-year-old Soldier in Madison’s 20-year military career would also carry him to the frozen terrain of Korea in 1950, and later into the jungle of Vietnam in 1965. He would often comment that he went from the rank of Private to Major, further than he ever expected to get. He served his country in uniform, faithfully and honorably for 20 years, retiring after his tour of combat in Vietnam in 1965.

After leaving the Army, he ran a successful gas business and the family farm in Elliston. A life-long Democrat, Marye ran unsuccessfully for the House of Delegates in 1972. In 1973 he ran and was elected to the Virginia Senate. In his 29 years there, he served on many committees and was most proud of his seat on the Senate Finance Committee and his chairmanship of the Senate Agriculture Committee. The latter put him in direct contact with some of the leading environmental and land use issues of the day. He was known for his fierce defense of a refundable beverage container bill, known as the “Bottle Bill” which was highly opposed by the bottling industry. He was more successful in 1999 when he introduced a bill reducing the tax on food purchased for human consumption.

Senator Marye was a strong proponent of funding for education and was particularly proud of the institutions for higher education in his district–Virginia Tech and its Cooperative Extension Service, Radford University and New River Community College.

As a senator, he had many friends on both sides of the aisle and was known for his ability to use humor and wit to disarm critics and bring consensus on difficult issues. His “Uncle Billy” stories were legend in the State Capitol and in his district.

In 2010 Marye and his wife placed a conservation easement on 562 acres along a scenic stretch of Route 460 in Montgomery County. He said he decided to “put his deed where his mouth was” to preserve the beauty of his home valley. His grandson, Madison Tyler, will continue the legacy of family farming.

The family would like to thank Nurse Vicky Corder and Dr. Julia Hemphill for their care of Madison, and also extends gratitude to Madison’s close friends Bill Ryan and J. R. Richmond.

The family will receive friends on Friday, February 26, 2016, from 4-7 p.m. at Horne Funeral Home. The Funeral Service will be held on Saturday, February 27, 2016, at 10 a.m. in the Horne Funeral Home Chapel, with Rev. Herbert Williams officiating. Interment will be private. Following the Funeral Service, the family will gather with friends at the Meadowbrook Center, Shawsville, in the Community Room, from 11:30 a.m. to 2 p.m. for refreshments.

In lieu of flowers the family requests donations be made in Madison’s memory to the Mountain Valley Charitable Foundation, 267 Alleghany Spring Road, Shawsville, Virginia 24162.