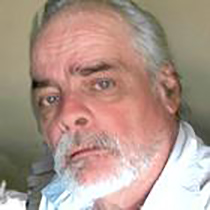 Brick was born to the late Sanfert and Edna Marie Marunich, January 2, 1948 in Thorpe, WV. He was the oldest of six children, one preceding him in death. Brick was educated in the Junior Bartlett High School in South Philadelphia, PA. Brick married the late Janie Norene Marunich in 1979 and three children were born from this union.

Brick expressed his life through his art work. He wrote a book, Society Silver Bullett and produced his own song, True Warrior with his all-time favorite rock and roll artist, Mitch Ryder. He opened his art gallery, “Bricks Soul Kitchen in 2007 in Narrows, VA and painted three beautiful murals in the area.

Brick leaves to cherish his loving memory his three children, Misty Carter of Radford, VA, Coltrane Marunich of Shawsville, VA, Louie Marunich of Narrows, VA, five grandchildren, Cierra, Brooklynn and Melvin Carter and Kayleigh Harrison and Tyrion Marunich, a host of nieces and nephews and all that knew and came to know him. Let us not forget his all-time best friend, his dog, Shorty.

It was Brick’s request to be cremated and returned to the earth along with his wife’s remains in Cherokee, NC. Online guestbook can be signed or condolences may be sent to the family at www.broyles-shrewsbury.com. Arrangements by Broyles-Shrewsbury Funeral Home, Peterstown, WV.