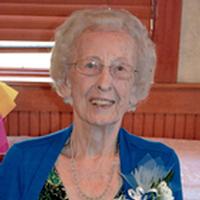 Viola Stafford Martin, 93, died at Springfield Center Lindside, WV, Wednesday, June 29, 2016. Viola was a long time member of Cashmere Baptist Church. She was a homemaker and known to be an excellent cook preparing lots of Sunday meals for her grandchildren and their families. Viola also worked outside of her home retiring from VA Tech in 1988.

Viola was born April 8, 1923 in Trigg, VA to the late James and Hattie V. Kirk Stafford. She is the last survivor of seven siblings. She married Earl Byron Martin November 18, 1944 in Pulaski, VA. They were married 53 years. Preceding Viola in death, in addition to her parents, was her husband, Earl Byron Martin, a son in law, Richard Hurley, two sisters, Lydia Foster and Anna Lee Stafford and four brothers, Emory, Wilson, Tuck and Roy Stafford, and a step daughter and husband, Elizabeth and Bill Cupp.

Funeral service will be 3:00 PM, Sunday, July 3, 2016 at the Broyles-Shrewsbury Funeral Home Chapel with Pastor Walt Bonnell and Pastor John Offenberger officiating. Visitation will be one hour prior to the service at the funeral home, Sunday. Pallbearers are: Byron Hurley, Brennan Hurley, Dylan McMahan, Graham Walker, Jacob Schroeder, Steve Shirey, Dan Huntzinger, Sam Walker, and Matt Schroeder.
Online guestbook can be signed or condolences may be sent to the family at www.broyles-shrewsbury.com. Arrangements by Broyles-Shrewsbury Funeral Home, Peterstown, WV.