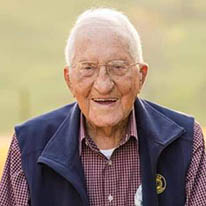 Ross Edward “Curly” Martin, the youngest 100-year-old we all know, formerly of Second Street in Pembroke, VA departed this life, July 7, 2021 surrounded by his loving family in Utah to be with his Heavenly Father and loved ones awaiting him beyond the veil.

Born at Mountain Lake on June 21, 1921, he was a son of the late “Cellie Marcellus and Pearl Geneva Smith Martin. He is preceded in death by his parents; his beloved wife of seventy years and 10 months, Gladys Williams Martin; his brothers Harold Martin, Alma Martin, and Eugene Martin (also his business partner); and a sister, Alberta Martin Williams.

Ross has been a life-long member of The Church of Jesus Christ of Latter-Day Saints, New River Valley Stake in Pembroke, VA where he faithfully fulfilled many callings, among them, Branch President, Bishop and Patriarch. It was a special gift to have Ross pray over your life in such duties.

He was retired from Celanese Corporation at Narrows with 37 years of service, from Pembroke Telephone Co-operative as manager, and with his brothers operated Martin Construction Company. He was a Veteran of the US Army, having served as gunner in the campaign through Italy, and was active in the American Legion Post 311, Pembroke where he participated in the Honor Guard, served and Commander, and Service Officer; he was also a member of VFW Post 6000 in Narrows; he was a Corncutter and proud graduate of Pembroke High School Class of 1938; VCU; and the Dale Carnegie Course. Ross also worked for Giles County as Manager of Castle Rock Recreation Facility; Manager of the Solid Waste Disposal and as County Administrator, served on the IDA of Giles County. He was an Active member of the Pembroke Ruritan Club. He was proud with his wife Gladys to be a world traveler visiting every state in the USA and sixteen foreign countries. Ross has also served on the Advisory Board of the National Bank of Blacksburg, on the Board of Directors for Pem-Tel, and Virginia-Carolina Telephone Co-op and was a Member of Virginia Telephone Co-op. If you know Ross or “Curly” you have been a blessed person to know and have such a gentleman as your friend.

Funeral Arrangements for Mr. Ross “Curly” Martin are incomplete at this time. However, the family requests that contributions or memorials be made to a charity of your choosing. Kendall Funeral Home are honored to be serving The Martin Family. A guestbook is available by visiting www.kendallfuneralhome.com.