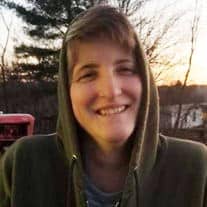 Priscilla Melody Barner Martin, of Ironto, died tragically on Nov. 21. She was 38. Raised in Loudoun County, Virginia, where she was homeschooled, she called the New River Valley home for most of her adult life. For the past several years, she had been the owner/operator of New Life Cleaning Services.

A former employee of Hanging Rock Animal Hospital and Angels of Assisi in Roanoke, Priscilla was a devoted champion of animals, and rescued more than a dozen dogs and cats over the years. She had recently been developing a small-scale farm at her home, raising sheep, goats, pigs, chickens, ducks, guinea fowl and rabbits. In her rare free time, she enjoyed horseback riding with friends. In recent years, she had become one of the most dedicated volunteers at New Freedom Farm, an equine therapy program in Buchanan that assists veterans and first responders.

Priscilla was also an accomplished cook, who loved preparing special meals and treats for the people in her life. Her homemade cheesecakes, snickerdoodles and other baked goods were prized by family, friends, and customers at farmers markets alike. All a friend had to say was, “Priscilla, it’s been a while since I had a cake,” and one would appear on the doorstep.

Along with her husband, Phillip, Priscilla was a member of Valley Bible Church in Radford, which is where the couple met. An active member who was involved with a number of small groups, Priscilla was a model for loving all of God’s children and helped create a culture of hospitality for the congregation. She possessed a strong compassion for others, especially those who were sometimes overlooked, and many have expressed how she touched their lives. Priscilla’s loving nature blessed her with a long list of friends who were as dear to her as family, and who will cherish her memory.

Priscilla is survived by her beloved husband of more than eight years, Phillip Martin; her beloved father-in-law, Andy Martin, of Roanoke County; her sister Eve and brother-in-law Ryan Gleason, of Lovettsville; two nieces, a nephew, and a host of aunts, uncles, cousins and extended family. She was predeceased by her father, Frank Melvin Barner, and mother, Lydia Marie (Casey) Barner.

The family would like to thank the entire Valley Bible Church community for their love and support, especially Priscilla’s special friends Patty and Stephen Bogese, Melanie and Landon Johnson, as well as Sara and Jeff Ford, along with Lois Fitz and everyone at New Freedom Farm. Your care was a godsend.

A memorial service will be held on Saturday, Dec. 4, at 1 p.m. at Valley Bible Church, 1300 Second St., Radford. Visitation with the family will begin at the church at noon. Following the service there will be a potluck meal. A main dish and beverages will be provided. Please bring a favorite side dish or dessert.

In lieu of flowers, donations in Priscilla’s memory may be made to New Freedom Farm, Angels of Assisi, Equilibrium Equine-Assisted Therapies, or to the animal welfare organization of your choice.