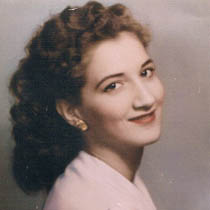 Louise Tingler Martin, 86 of Pearisburg, VA went to be with the Lord on February 26, 2016 at Carilion Giles Community Hospital in Pearisburg, VA. Mrs. Martin was born on May 9, 1929 in Fincastle, VA and was a daughter of the late Elmer B. and Zella Wiley Tingler.

Besides her parents, she was preceded in death by her husband , Earl Lee Martin, Sr. and one son Joseph (Joey) Dean Martin. Mrs. Martin was a retired employee of the Celanese Corp in Narrows with over 40 years service, was a member of the First Christian Church in Pearisburg and loved to cook for her family and friends.

A memorial service will be conducted Tuesday, March 1, 2016 at 2:00pm at the Givens Funeral Chapel in Pearisburg with the Rev. Jonathan Webster officiating. Online condolences can be sent to the family at givensfuneralhome.com.