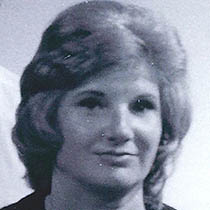 Janet Chase Perkins Martin of Pulaski, went to be with her Lord and savior on Sunday, February 12, 2017.

Daughter of Norwood C. Perkins and Nell Mae Mims Perkins of Hickory, N. C., she is survived by her husband, Lewis Martin of Pulaski; a sister, Sheila Stone of Lenoir, N. C.; her children, Brett and Suzanne Martin of Blacksburg and Leah and Bruce Short of Dublin; grandchildren, Ben and Geena Short of Pulaski and E4 Joshua Martin USAF; and great-granddaughter, Sage Caroline Short of Pulaski.

Janet grew up in Hickory, N. C. before attending Lenoir Rhyne College and earning her Bachelor’s Degree. She then started her career in Florida as a social worker while her husband was finishing his military service and college career. Upon moving back to Virginia, she earned her Master’s Degree in Social Work from Radford University and began a long teaching career at New River Community College. Over the next 28 years, Janet built the Human Service program at NRCC and cultivated several lifelong friendships among the college faculty and staff. Her many leadership roles earned her a respected name among her peers in the state as well as across the country. Her students learned from her experiences in the field as well as her kindness, compassion and warmth as their professor and friend.

Her community advocacy included the Women’s Resource Center, and Business and Professional Women’s Club. She attended the First Church of God in Dublin for over 30 years and was an active member of the congregation in several roles including: piano player, choir member, as well as participation in several committees.

Per Janet’s request, services will be private. The family asks that in lieu of flowers and cards that donations be made to the Pulaski Animal Shelter, 80 Dublin Park Road, Dublin, VA 24084.

The Martin family is in the care of Mullins Funeral Home & Crematory in Radford. www.mullinsfuneralhome.com.