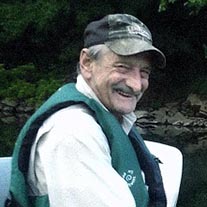 Jimbo was a 1972 graduate of Giles High School and a lifelong member of The Church of Jesus Christ of Latter-day Saints. Jimbo started working at Kroger’s at the age of 15 and retired there after 36 years. Jimbo loved the outdoors, hunting, fishing and camping. He loved his family and was told by his sisters that he was Mommy’s favorite.

A Celebration of Life will be held Wednesday, October 13, 2021, at 2pm at The Church of Jesus Christ of Latter-day Saints in Pembroke with Bishop Mark Bunker officiating with burial following in the Birchlawn Burial Park in Pearisburg. The family will receive friends at the Church before the service from 1 – 2 pm. Online condolences can be sent to the family at givensfuneralhome.com