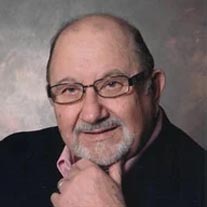 Jack Lloyd Martin, 82, died peacefully surrounded by his loving family on Aug. 22, 22. Jack was born on September 2, 1939 in Riner, Va. He was preceded in death by his parents Garnett and Beulah Martin, wife Norma J. Martin and oldest brother James (JB) Martin. (Doris)

Jack was a wonderful husband, father and friend. He grew up in small town Riner, where he spent most of his youth playing sports and working on a farm. He graduated from Auburn High school in 1958, shortly after graduation he enrolled into the United States Army. After his discharge from the Army he married his high school sweetheart.

In his retirement years he and his lifelong friend Walter Knowles were avid ground hog hunters.

The Martin family would like to thank the nurses and staff at Pulaski Health & Rehabilitation Center, along with special friends, Jean Trump and family, Fran Tieleman, Bill Pack, the late Stanley and Virgnia Perdue and Chuck Fugate.