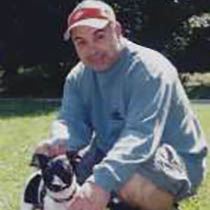 Born in Pearisburg on December 10, 1968 he was a son of the late Billy Gene and Ruth Kast Martin. Tony was a graduate of Giles High School and had earned a Bachelor of Arts Degree. Always a studious young man, an avid reader, lover of the outdoors and outdoor activities, he had been employed as a manager in food service and currently as an insurance adjustor for Enterprise Rent-A-Car.

Funeral services will be conducted Friday, February 10, 2017 at 2:00 pm in the Kendall Funeral Home, 605 Snidow St., Pembroke with Pastor Eddie Kendall officiating. Burial will follow in Birchlawn Burial Park in Pearisburg. The family will receive friends at the funeral home from 12 until 2 pm before the services. Online condolences may be sent by visiting kendallfuneralhome.com.