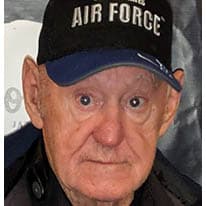 Harley was born in 1930 in Pulaski, VA He was the youngest of six children raised in Allisonia during the Great Depression and WWII by his father, Harley T. Marshall who owned a general store and his mother, Bessie Lindsey Marshall, a school teacher who raised him after his birth mother, Pherba Bond Marshall passed away.

In 1948 Harley went to VPI & SU – Virginia Polytechnic Institute and State University now known as Virginia Tech. Harley worked his way through college, selling grilled cheese sandwiches on top of the ROTC dorm and hauling limestone during breaks. While a freshman he met the love of his life, Elizabeth Ann who was at Radford College. When Harley graduated in 1953, he married his “Sweetum,” now a school teacher, and together they enjoyed life as Harley rose through the ranks of the U.S. Air Force as a Navigator. During this time they adopted two infants, Rebecca Ann and Thomas. Harley’s Air Force career included serving 15 months in Vietnam where he received several medals and citations including the Distinguished Flying Cross, the National Defense Service Medal, and the Air Force Commendation Medal. After serving 20 years in the Air Force, Harley retired as a Major.

Following his Air Force career, Harley went back to Virginia Tech and earned a second degree as an Accountant. He worked for Virginia Tech and upon retirement he and Ann moved to their dream home that Harley designed and built near his birthplace. He and Ann spent many years cherishing time with their children and grandchildren. Harley enjoyed serving Dublin Baptist Church as Treasurer and Deacon, drinking coffee with friends, dining out and buying clothes and jewelry for Ann, “Momma.” Sadly, Ann passed in May 2017 after 69 years of being with Harley.

In recent years Harley resided in Mount Pleasant, SC and enjoyed spending time with his grandson, “My Buddy” Jared especially when Jared took him out for adventures

In addition to his family, Harley will be deeply missed by his brother George Marshall of Allisonia, his sister-in-law Erma Jean Marshall of Pulaski, and many nephews, nieces, cousins and friends. Harley was pre-deceased by an infant granddaughter, brothers Alvin and Tommy Marshall; sisters Paulena Anderson and Faye Marshall; and sister-in-law Madelin Marshall.

Harley’s family gratefully thanks the Mount Pleasant Gardens Alzheimer’s Special Care Center for their loving and compassionate care that enabled him to enjoy life with dignity while living with Lewy Body Dementia.