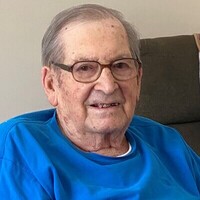 On December 14, 2020, we had to say good-bye to the greatest Daddy in the World, Carmon James Marshall. He was born June 9, 1926 to Everett and Maretha Marshall.

He grew up in Indian Valley, Va. until he went off to World War II. After returning home he married Myrtle Hollandsworth Marshall and they made their home in Radford, Va. He was the owner of a wholesale tree nursery for 75 years and had a small farm he enjoyed working on. He was humble, kind, and always had a smile on his face. He never raised his voice or met a stranger. We will miss him but he will be forever in our hearts.

His two daughters and sons-in-law, Janet and Steve Bishop, and Sherry and Danny Vaughn, all of Radford, survive him. He had three grandchildren, Kimberly (Scott) Keith of Lovettsville, Va., Kristen (Scott) Lucas of Charleston, S. C., and Justin (Emily) Vaughn of Winston-Salem, N.C.. He had 10 precious great-grandchildren, Jacob, Daniel and Kora Keith, Liam and Mallory Lucas, and Kerrigan, Gracie, Bowman, Graham and Anderson Vaughn. He has a sister, Vera Hollandsworth, and brother, Davis Marshall, both of Indian Valley, Va.

A private memorial service will be held.

The Marshall family is in the care of Mullins Funeral Home & Crematory in Radford. www.mullinsfuneralhome.com

REST IN PEACE WITH YOUR LORD DADDY!