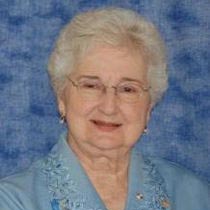 Elizabeth “Ann” Elliott Marshall, 86, of Allisonia, Virginia, wife of Major Harley T. Marshall, Jr., USAF Retired, passed on peacefully Wednesday, May 10, 2017 to be with our Lord and Savior Jesus Christ. She will be deeply missed by: her husband and love of her life, Harley of 69 years; her daughter Rebecca Ann Marshall Imholz and her husband John, of Mount Pleasant, SC, son Harley Thomas Marshall, III of Norfolk, VA and her beloved and cherished grandchildren: Daniel Imholz, Matthew Marshall, Luke Imholz, Jared Imholz and Morgan Marshall.

Ann was born December 3, 1930 in Virgilina, VA the youngest child of Ed and Virgie Hudson Elliott. Ann graduated second in her class from Virgilina High School in 1948 and in 1952 earned a B.S. degree in Education from then Radford College where she was active in the Baptist Student Union, President of the Y.W.A; Student Executive Council, Senior Class Representative, YWCA Social Chairman and Secretary. One of the most prestigious honors to be bestowed upon a Radford student in those days was the role of “Madonna” in the annual Christmas pageant and Ann received that honor her senior year. While at Radford she met the love of her life and after marrying Harley in 1953 she embarked on a 20-year adventure as the wife of a US Air Force Officer traveling the United States and making a home for her family however briefly they resided until the next assignment. Ann loved children and taught mostly middle schoolers for over 40 years in five states. In 1974 she moved to Southwest Virginia teaching at Dublin Middle School until her retirement in 1996. Upon her retirement she would encounter former young students, now adults, and still knew them by name. In turn, they remembered her as one of their favorite teachers who taught and always encouraged them in all aspects of their young lives.

Ann always put her family’s needs above her own and daily exhibited grace and her love for her Lord Jesus Christ. Her love and devotion for her family caused her to be an amazing wife and mother who always had a home-cooked meal on the table every night even after a long day of teaching, sewing clothes for any occasion, and gardening. Her passion for the Lord led her to be active in leadership and servant roles at every church she attended. She was an active member of Dublin Baptist Church since 1974 and her favorite organizations were Mission Minded Women and WMU. Upon retirement Ann enjoyed serving her church, traveling to and spending time with her grandchildren, and taking care of Harley in their dream home in the beautiful mountains of Allisonia.

In addition to her family and her beloved dog “Bu J,” she will be deeply missed by her sister and brother-in-law Lucy and Edward Chandler of Virgilina, VA; ; her brother-in-law and his wife George and Madeline Marshall of Allisonia; her sister-in-law Erma Jean Marshall of Pulaski, VA; and many nephews, nieces, cousins, friends and her Dublin Baptist Church family. She was pre-deceased by an infant granddaughter, sisters Margaret Smith and Virginia Puryear, brothers Herbert and James Elliott, brother-in-laws Alvin and Tommy Marshall and sister-in-laws, Faye Marshall and Paulena Anderson.