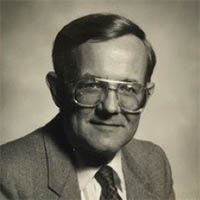 Richard was born in Greenville, Ohio on June 29, 1937 to Vernon and Louise Marchal.  Following his graduation from Greenville High School he joined the US Navy, where he served for four years in the Pacific as a radio operator on a P2V Sub Hunter.  Upon his honorable discharge from military service he enrolled at University of Dayton, where he would meet his wife of 51 years, Carol Ann Bolan.  He and Carol had their first son, Matthew Walter, in 1970 and their second son, Andrew Paul, was born in 1975.

Dick began his career in the travel industry with TWA, including assignments in Dayton, Pittsburgh and Northern Virginia.  In 1972 he moved with Carol and Matthew to Roanoke where he became a member of the Travelmasters management team.  Richard opened the Blacksburg office of Travelmasters in 1975, where he worked until his retirement nearly 30 years later.

Dick was a parishioner of Our Lady of Nazareth in Roanoke, and St. Mary’s in Blacksburg. He was a long time Rotarian, loved family, cooking, travel, jazz, and was a passionate fan of Notre Dame and Virginia Tech.

Mr Marchal is survived by his wife Carol, two sons and daughters-in-law, Matthew (Kelly) of Atlanta, Georgia and Andrew (Thea) of Los Angeles, California; as well as two brothers, John (Joy) of Greenville, Ohio and George of Thailand; a sister Mary (David) of Cincinnati, Ohio, a sister-in-law Patricia of Greenville, Ohio, as well as numerous nephews and nieces.

In addition to his parents, he was preceded in death by his brother Robert and sister Carole.

Funeral Services will be conducted Monday, April 9, 2018 at St. Mary’s Catholic Church in Blacksburg VA at 11AM,  with a reception to follow at Noon.  In lieu of flowers the family requests memorial contributions to Good Samaritan Hospice. (goodsamhospice.com). Arrangements by McCoy Funeral Home, Blacksburg.