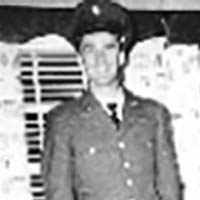 Oliver Wendell Manning Jr. 69, of Vinton, Va., and formerly of Copper Hill, Va., left us for his heavenly home on Sunday, July 5, 2009, at the Veterans Care Center in Salem, Va. He retired as a yard brakeman at NS Railway and served his country in the United States Army.

The family gives special thanks to the staff of Virginia Veterans Care Center, Salem, for their loving care of Oliver during his courageous battle of Alzheimer. He loved all of you.

A service to celebrate his life will be held 5 p.m. on Wednesday, July 8, 2009, at Copper Hill Church of the Brethren with the Rev. Roy Turpin officiating. A dinner will follow the service. There will be no visitation at the funeral home.

In lieu of flowers, donations may be sent to the Copper Hill Church of the Brethren Building Fund, Copper Hill, Va.