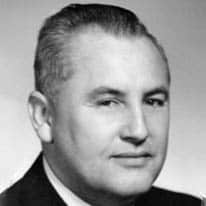 Harold served in the U.S. Army during World War II, in the 1255th Engineer (Combat) Battalion which liberated the town of Vianden, Luxembourg during the Battle of the Bulge. He obtained his Bachelor’s and Master’s degrees in History from Emory University, obtaining a Phi Beta Kappa key during his junior year. He began study for his Doctorate degree at University of Wisconsin – Madison. He completed his study and obtained his Ph.D. from Duke University. Dr. Mann’s thesis was a biography about Atticus Green Haygood, and he authored several papers on the economic development of western Virginia. Dr. Mann was a professor of history at Emory-at-Oxford College, and Professor Emeritus at Radford College (later Radford University).

While at Emory-at-Oxford College, Dr. Mann directed the Glee Club, for which he was honored in 2002 by the College with the naming of the Harold Mann Lobby of Few Hall. Harold sang, was organist and directed choirs for almost 20 years in many churches and civic choruses in Radford and Roanoke, Va., including Presbyterian Church of Radford, Grace Episcopal Church, and the New River Valley Chorus. He was a principal founder of the Faculty Club at Radford University. He was a lifelong avid Democrat and served on the Democratic executive committee in Radford, Va.

Dr. Mann is survived by his son, Harold W. Mann Jr. and his wife, Amy, of Centreville, Va.; daughter, Martha M. Carroll and her husband, Scott, of Cross Junction, Va.; daughter Janet M. Palmer and her husband, Christopher, of Missoula, Mont.; and five grandchildren. He was predeceased by his wife of 65 years, Elizabeth Parks Mann; his sister, Annie Lillian “Lil” Mann; and his brother, Dr. David Samuel Mann.

Interment will be at Maplewood Cemetery, Durham, N.C., and a Celebration of Life will be held on a date to be announced.

Dr. Mann impacted many people through his military service, his professorship, and his music. He will be missed by many.

Online condolences may be left at www.jonesfuneralhomes.com.