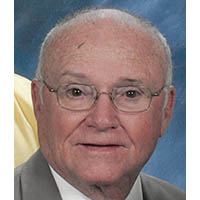 Charles W. Maness, Sr. passed away May 5, 2020 at the age of 88. Born in Damascus, Virginia to the late Robert Huddle Maness and Ethel Sprinkle.

Charles, known as “Red” growing up due to his curly red hair and later as “Charlie” as an adult, was raised in Radford, Virginia, graduating from Radford High School in 1950. A four-sport athlete in high school, he was a proud member of the Bobcat’s state championship basketball team. He went on to play basketball while attending Milligan College in Tennessee. He received an Honorable Discharge from the United States Navy in 1955, proudly serving his country during the Korean War.

While home on leave in 1954, he met Hazel Lillian Gravley at Claytor Lake (which he frequently claimed to have swam across) and they were married later that year. Hazel was his lifelong partner and together they had four children during the span of their marriage of 66 years. After his military service he returned to Radford and entered the grocery business, working primarily for the Kroger Company. He was trained as a butcher, successfully running many meat markets for the company.

Later he studied and became a licensed insurance agent and in 1965 moved the family to Salem, Virginia to open an independent insurance agency. This was a pivotal move both professionally and personally as Charlie led his family to join the Westside Church of Christ in Salem. As his faith grew, he served as a bible schoolteacher, church treasurer, deacon and for many years as an elder of the congregation.

At the age of 49 he fulfilled his ambition to own a new car dealership when he moved to Collinsville, Virginia to run a Pontiac Dealership. While living in Collinsville, he served as an elder of the Collinsville Church of Christ. Charlie went on to own and operate three other dealerships, retiring at the age of 65 as a successful and respected businessman. Born a natural salesman, he enjoyed selling insurance, but he loved selling cars and the car business.

He is survived by his wife Hazel, his daughter Linda K. Maness, and sons Charles W. Maness Jr., Dale Anthony Maness, and Thomas Eric Maness. He was preceded in death by his lifelong best friends, his brother Bob and sister June.

The family would like to thank the staff at Salem Terrace at Harrogate for their exceptional and loving care of Charles over the last year.

A private graveside service was conducted on May 9, 2020. A public memorial is being planned for later in the year when current public health restrictions allow.

Online condolences may be sent to the family at www.johnmoakey.com