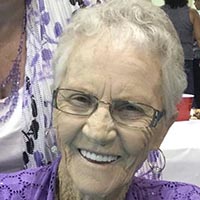 Carolee Bowles Madero, 84, of Pearisburg, and lately of Kingsport, Tenn., departed this life to slip into the arms of Jesus at her home, Saturday evening, April 28, 2018 surrounded by her loving and caring family.

Born in Narrows, on March 15, 1934 she was a daughter of the late Robert W. and Ida Clark Bowles who waited to greet her in heaven along with her twelve brothers; and sisters; her loving husband, Fred Madero; her precious grandson, Dale (Dalsey, Walsey, Palsey, Johnsy) Johnston as he called himself to her for many years; and a special nephew, Tommy Bowles (who was more a son than a nephew). She is hand in hand with Jesus and her family. What a reunion is waiting for the rest of her family.

While living in Pearisburg, Carol was a part of the family of faith at Bethel Chapel in Clendennin, and while in Kingsport she was a part of the faith family at Bays Mountain Baptist Church. Carolee was a wonderful worker for the Lord, she lived her faith every day. She was involved with many organizations over the years and worked at the Giles County Jail as the cook for many years.

Among her many activities she was a part of the singing group “The Three Generations (which consisted of herself, her daughter and granddaughter) later on it was “The Three Generations Plus One” as her “cupcake” joined the group with them. In later years she was part of the singing group “The Gleeful Voices”. She also belonged to the RSVP Advisory Council, The Pearisburg Senior Center, The Kingsport Senior Center, The Happy Day Singers, the Giles Memorial Hospital Volunteers, various nursing home ministries and The Red Hat Society.

Carolee was involved in many clubs too numerous to mention, and she was a loving friend and neighbor to many, always will to lend a helping hand, but as with most women her most cherished job was being called Mommy, Grandma and Gran-Gran.

Funeral Services will be conducted Tuesday evening, May 1, 2018 at 7 p.m. in the Kendall Funeral Home, 605 Snidow St., Pembroke, VA with Pastor Eddie Kendall officiating and the Bethel Chapel Choir singing. Graveside Services will be in Birchlawn Burial Park in Pearisburg, VA Wednesday morning at 11 a.m.

The family will receive friends at the funeral home Tuesday evening from 5:30 until 7 p.m. before the services. There will also be a visitation and memorial service for Kingsport friends and church family at 7 p.m. on Thursday, May 3, 2018 in the Bays Mountain Baptist Church at 2000 Meadowview Parkway, Kingsport, TN.

Thank you to all who have been a part of Carol Madero’s life in any small way, she cherished each encounter she had with anyone. Online condolences may be sent by kendallfuneralhome.com.