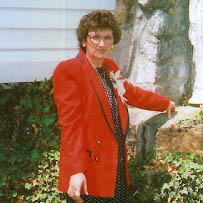 Serafina Mackian, 83, died on Thursday, July 2, 2020 in Floyd, Virginia. Born in Bosnia on September 7, 1936, she was the daughter of the late Rose & Ivan Kajic. She is also preceded in death by her beloved husband of 10 years, Gerald “Paddy” Mackian.

Serafina established her faith early on in life. She held her faith dear to her heart and passed down through the generations, to her children and grandchildren. She was known for supporting her family through prayer. Her children say her firm Catholic beliefs helped shape them into the people they are today. When asked to describe Serafina, her children said she was the definition of strength, a constant in this ever changing world.

She has always provided comfort in times of need. Regardless of what was going on around them, she played her role as mother. Her children say they always had her providing them love and security in time of need.

Serafina spent most of her life living in Eastern Europe providing for her family. She moved to America when she was 49. On top of being a loving mother,she was the kindest grandmother. Her grandchildren say they will miss her Serbian mac and cheese and her famous bread. Those who were closest to her, refer to her as “Baba,” Serbian for grandmother.

Serbian was Serafina’s predominant language, as she spoke very little English. Her family says for a woman who didn’t speak English, she made America feel like home. Her caring nature and passionate heart will be truly missed. The family she leaves behind says she brought out the goodness in the world and gave them strength to face difficult situations and overcome them.

A private graveside service consisting of family will be held in the Jacksonville Cemetery.

Serafina will truly be missed, but her family is glad she is finally at peace in the arms of her loving Savior.