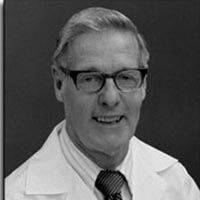 One of the original faculty members at the Virginia-Maryland College of Veterinary Medicine where he taught large animal medicine, he began his more than 20-year affiliation with Virginia Tech as an Extension Veterinarian in 1962. In that capacity, he assisted farmers throughout the state, helped organize and judge the dog show program of the State Fair of Virginia, and served in Virginia Tech’s anaerobe laboratory. He considered one of his most important contributions to Virginia Tech to be his role in the founding of the university’s chapter of Alpha Gamma Rho, a national agriculture fraternity. He retired from Virginia Tech in 1983.

During his active retirement, he was recognized as an accomplished woodworker, and was deeply involved in genealogical research. Prior to his work in Blacksburg, he was a practicing veterinarian in Wooster, Ohio, and Millersburg, Ohio, and was on the faculty of Washington State University and the University of Idaho. He earned his degree in veterinary medicine from Ohio State University in 1950. A combat veteran of World War II, he served in the European Theatre of Operations with the 389th Field Artillery, 97th Infantry Division. As a youth he earned an Eagle Scout badge.

Dr. MacInnis was born March 8, 1922, in Salem, Ohio. He was preceded in death by his parents, Angus and Inez MacInnis, and his sisters Judith MacInnis and Nancy Naccarato.

He is survived by his wife of 60 years, Eleanor, and his children, Ronalee MacInnis of Provo, Utah; Mary Masciovecchio and her husband, Lou, of Anderson, S.C., Bruce MacInnis of Blacksburg, Va., Stewart MacInnis and his wife, Valorie, and their children, Ellen and Michael, of Buena Vista, Va.; and Brian MacInnis and his wife, Kim, and their children, Ian and Neil, of Christiansburg, Va. He is also survived by his sister, Eunice Mitchell of Cedar Rapids, Iowa, a number of cousins, and numerous nieces and nephews.

In lieu of flowers, memorial contributions may be made to the Alpha Gamma Rho Alumni Corporation of Virginia (MacInnis Memorial), P.O. Box 11055, Blacksburg, Va. 24062. At his request, no services will be held. Arrangements by McCoy Funeral Home, Blacksburg.