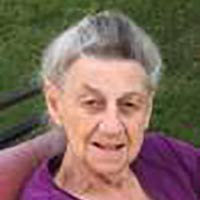 Betty Wade Mabry, 87, of Pembroke, VA departed this life for her Heavenly Home on January 30, 2020 due to a decline in health following a stroke. Betty was born in Hillsville, VA on March 16, 1932. She was the daughter of William Wade and Bennie Reames Wade.

She was a graduate of Radford University and was a School Teacher for many years in her early life and later worked as a Ward Clerk at a Lynchburg, Virginia Hospital. Once the family moved to Giles County in 1973, she spent many years babysitting for local children, including her own grandchildren. She later worked as a Certified Nurse’s Aide at Heritage Hall in Blacksburg, Virginia where she retired after 13 years. She was a devout Christian and very active in the Pentecostal Faith, serving as Church Treasurer for many years.

Betty was preceded in death by her parents, her husband Clarence T. Mabry, and all seven of her siblings brothers were William Wade, Jr., Waverly Wade, Jack Wade, and Grady Wade, and sisters Kathleen Cruise, Linda Jeffries, and Helen Barnes.

Funeral services will be conducted on Sunday, February 2, 2020 at 12:00 PM in the Kendall Funeral Home Chapel 605 Snidow Street Pembroke, Virginia with Pastor Eddie Kendall officiating. Burial will follow in Highland Memory Gardens in Dublin, Virginia. The family will receive friends in the funeral home one hour prior to the funeral services in the Kendall Funeral Home Chapel.