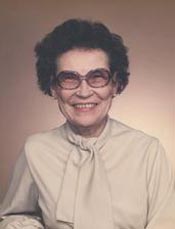 Vera Morrison Carter Lyons, 94, of Radford, went to be with the Lord Thursday, May 8th, 2014. She was born in Warren County, Virginia on February 21, 1920. She was employed by D.M.V. in Christiansburg, where she retired at age 75. She was preceded in death by her parents Pelham O. Morrison and Olga Velma Cullers, three brothers, her husband Edgar Pittman Carter, her second husband James William Lyons, and a step-grandson Roger (Doug) Lyons.

It is the request of the family and Vera’s wish that in lieu of flowers, donations be made to Pulaski Primitive Baptist Church C/O Bob Webb, 4092 Trebor Lane, Pulaski, VA 24301.