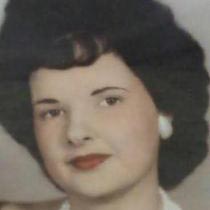 Alma Jones Lyons, age 75 of Pulaski, died Friday morning at her residence. She was born on August 9, 1940 in Pulaski, and was the daughter of the late Maggie Funk Jones and Tirey Glenn Jones. As a child, Alma attended the Back Creek Pentecostal Holiness Church.

In addition to her parents, she was preceded in death by two brothers: Glenn Junior Jones, and Robert Alan Jones and sisters; Evelyn Marie Jones and Betty Jane Taylor. She is survived by her husband of 59 years; Ted Drexel Lyons of Pulaski: a daughter; Debra “Debbie” Lyons of Pulaski; a brother; Billy Edward Jones of Pulaski. Also survived by two grandchildren; Richard “Joey” Joseph Manning and Chad Austin Manning both of Pulaski, along with a great grandchild; Jaxxon Harley Hurst of Pulaski and several nieces and nephews.

A private graveside service will be held at Thorn Spring United Methodist Church Cemetery. There will be no public visitation. Online condolences may be sent to the family by visiting www.seaglefuneralhome.com. Arrangements by Seagle Funeral Home, Pulaski. 540-980-1700