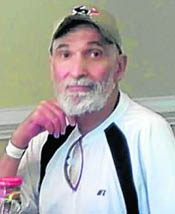 Mark Kenneth (Kenny) Lundy, age 60, from Pulaski, Virginia, died at Duke University Hospital of complications from Leukemia on Friday, February 21, 2014. Kenny was born on October 19, 1953 in Charlotte, North Carolina to Verta Maxine Turman and the late Troy Lee Lundy, Jr. He married Susan Elaine Newsome Lundy on August 2, 1980 in Pulaski. He was a lifelong resident of Pulaski. He worked in sales for Layman Distributing as a territory manager. Kenny loved the outdoors. He spent many weekends with his grandkids camping and kayaking. He loved a lazy ride down the New River with friends and family in tow. He had developed a new love of cooking. He was always trying a new dish. He was preceded in death by grandparents Mayme Alley Lundy and Troy Lee Lundy, Sr. Left to cherish unforgettable memories are his wife, Susan, and their daughter, Tara Renee’ Lundy Batten of Pulaski; two grandchildren, Connor Ashton Batten and Cayden Riley Dunford; and step-grandchild, Zachary Alexander Batten; his mother, Maxine Turman; and two sisters, Vicki Holton and husband Jerry, Ann Grundstrom and husband Tom. Funeral service will be held 11 a.m. Wednesday, February 27, 2014 at The First United Methodist Church with the Reverend Hugh Kilgore officiating. Visitation is Tuesday, February 26, 2014 from 6 until 8 p.m. at the Family Life Center at the First United Methodist Church in Pulaski. In lieu of flowers, donations can be made to the Duke Cancer Institute, DUMC 3828, Durham, NC 27710 or The Leukemia and Lymphoma Society. Online condolences may be sent to the family by visiting www.seaglefuneralhome.com.Arrangements by Seagle Funeral Home, Pulaski. 540-980-1700.