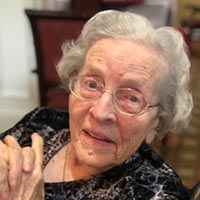 Elizabeth Hall Lundy, formerly a resident of Pulaski, and Waynesville, NC, passed away peacefully in her sleep on July 5, 2018. Elizabeth, or “Wiz” as she has always been known, was born in Pulaski on January 21st 1919 as the oldest of three daughters of Bassett Kee Hall and AllenaSmith Hall.

The new couple were sent first to Oak Ridge, Tennessee, where Wiz’s oldest son Fielden was born. They were there while parts of the atomic bombs that ended World War II were being built, and then were sent by the Methodist Board of Missions to Yale University, where they studied Mandarin Chinese. The plan was for them to serve in China, but while they were at Yale, Mao Tse-Tung took over the reins of power in China and banned further missionary arrivals.

The Board of Missions decided to send them to Malaya instead, which eventually became Malaysia, where there were many Chinese-speaking people. While the couple were awaiting reassignment, their second child Allen was born. Wiz and Bob served in Malaysia and Singapore for almost twenty years before returning to the United States. While in Malaysia, their third child Elisa was born. Wiz worked at Bob’s side while in Malaysia and Singapore, helping to run women’s organizations within the church and in support of their joint mission.

Once back in the USA, Wiz worked as a secretary, drawing on her college training in stenography and shorthand. It was a long and interesting journey from a small Virginia town to Malaysia and Singapore, which were literally on the opposite side of the earth from where Wiz was born, especially after Wiz’s dad had advised her new husband “to treat her well and don’t take her very far from home.” During Wiz’s life, she raised three children, was a pastor’s wife, a home-school teacher, a secretary, an administrative assistant, and a PTA president. Her life included two world wars, a number of smaller conflicts, The Great Depression, and eighteen US Presidents.

She is survived by her three children, eight grandchildren, and one greatgrandson, and by her two younger sisters, Jeanne and Eleanor. Wiz’s husband, Bob, died in 2003 and Wiz will be buried next to him in Pulaski. Graveside funeral services will be held Saturday, July 28, 2018 at 2:00 p.m. at Oakwood Cemetery.