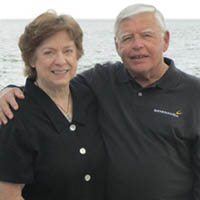 J. Ward Lowrance died peacefully at his home in Floyd, Virginia, on Saturday afternoon, August 8, 2020. His wife of 58 years, Judy, was with him.

Born on September 24, 1939, in Mooresville, NC, Ward was 80 years old at the time of his death. He lived a full, happy life and loved his family and friends dearly. Raised as an Air Force “brat,” he went to over 30 schools in ten years. His father was stationed in Hawaii when Pearl Harbor was bombed; Ward and his mother got under the dining room table when the officers’ quarters where they lived were strafed by Japanese pilots. Ward and Judy met at Mercer University in Macon, Georgia, and were married right after their graduation. He attended graduate school at the University of Pennsylvania and then worked for 28 years in human resources for Burlington Industries. A second career, with Ward and Judy working as managers together for Holiday Retirement Corp., took them to many interesting places including Hawaii and England. After retirement, they moved to Floyd and enjoyed lots of wonderful trips traveling all over the U.S. and worldwide. Ward was a member of numerous different organizations during his lifetime — too many to name individually — but while living in Floyd, he was active in the Floyd County Historical Society and the Floyd Center for the Arts as well as being a member of Zion Lutheran Church.

Ward was a skilled photographer; he loved the outdoors and was a Boy Scout leader (having been an Eagle Scout himself); he was a great cook and enjoyed good food; he was a prolific reader and a lover of maps, history, and most especially, his grandchildren.

Because of Ward’s personal wishes (as well as the Covid-19 virus), only a small private service for the immediate family will be held to honor Ward’s life. Please gather your family together, cook a good meal, and raise a glass in memory of Ward.