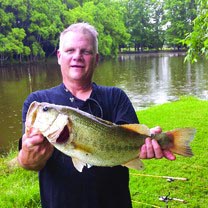 Robert Alfred Lowe Jr., known as “Rob” to friends and “Freddy” to family, went home to be with Jesus on June 17, 2021, at age 57, from natural causes. He was surrounded by family throughout his illness and transition.

Born on January 31, 1964, in Norfolk, Virginia, to Bob and Bobbi Lowe. Rob was a long time resident of the New River Valley. Rob spent his career working as an Executive Chef in the area, and many of his recipes are still featured on local menus.

Rob was a master fisherman and his true passion was to spend time outdoors and on the water, often with his Dad or his dear friend, John. Rob was known for his nurturing and gentle spirit, willingness to help any soul in need, and deep caring for his friends, family and many pets. He’s been described as the best friend anyone could ever ask for and his warmth, hugs, wisdom and excellent cooking will be missed by many. Rob had a strong faith in the presence and goodness of God. His greatest concern in the months approaching his departure was for those who would be left behind.

Rob is survived by his parents, Bob and Bobbi Lowe; sisters and brothers-in-law, Peggy Lowe and Troy Henry, and Ginni and Terry Bussey; his nieces and nephews, Justin Lowe, Kayla Henry, Rhys Lewis, and Steven Bussey; a large extended family; and his dear friend, John Waldo, whom he thought of like a son.

In keeping with Rob’s generous spirit, he has donated his remains to medical study in lieu of a burial. A celebration of life will be held for family in the coming months, but given his love of music, especially classic rock, he would love to watch us singing, dancing and remembering him with a big smile, any time the spirit moves us.

The family requests you help us celebrate Rob’s life by donating to Carilion Hospice, or Diabetes Research.

Psalm 116:5-9 “The Lord is gracious and righteous; our God is full of compassion. The Lord protects the unwary; when I was brought low, he saved me. Return to your rest, my soul, for the Lord has been good to you. For you, Lord, have delivered me from death, my eyes from tears, my feet from stumbling, that I may walk before the Lord in the land of the living.”