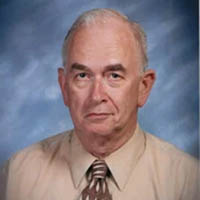 He grew up near Mozer, WV and joined the Army in 1963 to work on crypto machines while stationed with the Berlin Brigade in Germany. He later continued a career in electronics, settling in Blacksburg to raise a family. He worked at Virginia Tech in the Engineering Science and Mechanics Department from April 1975 to June 2003 as a lab technician, making instruments and assisting student labs.

George had a passion for Scouting and the outdoors, the Italian language, opera, fine campfire cooking, aviation, astronomy, mathematics, and helping students in the lab. He helped in the local Blacksburg Boy Scout troops 56 and 44 as a committee member.

Due to the ongoing global pandemic, ceremonies will be postponed until an appropriate time. If you would like to be informed, please send an email to: george.lough.family@icloud.com. in lieu of flowers, donation suggestions include Blacksburg Presbyterian Church and the Boy Scouts of America. Arrangements by McCoy Funeral Home, Blacksburg.