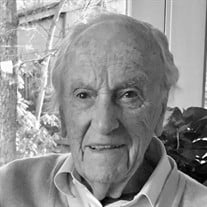 Anthony (Tony) Lopez was born on May 13, 1919, in Quillota, Chile. He died peacefully at home at age 102 on August 22, 2021, in Blacksburg, Virginia. Tony’s parents were Flora Matas de Lopez and Antonio Lopez Benito. Both his mother’s parents (French and Spanish) and his father (Spanish) immigrated to Chile from Spain.

Tony was proud of his Spanish, French and Chilean roots. He was the oldest of 4 siblings, including his sister Flora, and his brothers Carlos and Michael. He often spoke of happy memories of childhood with his sister and brothers, especially family games of tennis with their father. He was an accomplished tennis player and won a national high school boys singles title in Chile. Tony’s passion for tennis was life-long, and he played often and regularly through his late 80s.

Tony attended a Jesuit boarding school in Santiago, Chile, for much of his early education, and received an excellent classical education. This was followed by studies at the Catholic University of Chile and graduation with a degree in chemistry. Soon after he won a scholarship competition to study in the United States. He subsequently enrolled at the University of Massachusetts, Amherst, to study food science. While there, during Thanksgiving dinner at his major professor’s house, he met the professor’s daughter, Mary Fellers.

In 1947 Tony was awarded the Ph.D. in food science and technology, and shortly thereafter, he and Mary were married. They moved to Santiago, Chile, where Tony worked for Sanitas Pharmaceuticals, and they started a family, having a daughter and a son. After a few years in Chile, the family moved back to the United States so that Tony could return to academia, and they had their third child, a son. Tony was on the faculty at the University of Massachusetts, Amherst, and the University of Georgia before being recruited to Virginia Tech as a full professor in 1954. There he was instrumental in developing the Food Science and Technology Department. He remained at Virginia Tech for the rest of his distinguished career, deeply involved in research, teaching, and service to the university and to the field of food science. He retired in 1990 at age 70. One of his proudest achievements was the mentoring of numerous graduate students, many of whom have gone on to distinguished careers themselves all over the world.

Tony will be fondly remembered for his soft-spoken intelligence, dry wit, generosity, and kindness. He was devoted to his family, he loved to travel, and he prized a good game of tennis. His was a long and healthy life, and well lived. He was loved by many and will be greatly missed.

The family will gather privately to celebrate his life. If desired, contributions to honor his life and legacy may be made to the Food Science and Technology Department at Virginia Tech (fst.vt.edu/giving). A memorial website for condolences and memories may be found at: mccoyfuneralhome.com.