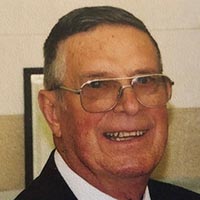 James (Jim) Arthur Long, 88 of Pearisburg, VA passed away on Friday, June 22, 2018 at his home. Jim was born on August 10, 1929 in Oak Hill, WV and was a son of the late Charles Abner Long and Anna Grace Eaton. Jim was an Army Veteran of the Korean Conflict and retired from the Celanese Corp. in Narrows with 37 years of service. He was an avid fisherman and loved wood working. He is survived by his wife of 65 years, Sue St. Clair Long of Pearisburg, son, James Bryan Long of Pearisburg, three daughters, Pam & Brian Tate of Pearisburg, Carolyn & Ralph Kidd of Abington, Rea Schmidt of Sarasota, Fl, six grandchildren, Ashley and Derek Snider, Logan and Meaghan Tate, Tyler and Margaret Kidd, Troy and Carey Kidd, Caty Kidd, Cody Schmidt . seven great grandchildren, Kylee Snider, Owen Snider, Laighton, Tucker and Parker Tate, Maddox and Pierce Woodyard and many beloved nieces and nephews. Funeral services will be conducted Monday, June 25, 2018 at 12pm at the Givens Funeral Chapel in Pearisburg with the Rev. Gary Poff officiating with burial following in the Birchlawn Burial Park in Pearisburg. The family will receive friends at the Givens Funeral Home two hours before the service. The family would like to express their appreciation to Crystal Coleman, Angie Weatherly, Donna Stafford, Christine Brookes and Brenda Whittaker for their compassionate care over the past year. Online condolences can be sent to the family at givensfuneralhome.com.