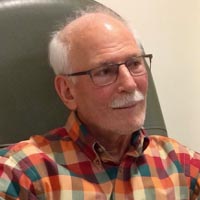 Bobby spent much of his boyhood in Vibank, SK, and Windsor, ON, with his grandparents, Jacob and Nellie Sawcyn before moving to the US to complete high school. He served in the US Army from 1959 to 1963, after which time he became a naturalized US citizen.

In New York City Bob received a Certificate of Architecture from The Cooper Union in 1967, and a Bachelor of Architecture from the City College of CUNY in 1973. He later relocated to Charlotte, NC where he met his wife, Cindy, in a yoga class. They were married on October 3, 1980 in Independence, VA, where they purchased Lookout Farm with its rustic cabin.

Bob practiced architecture for more than a decade before relocating to Blacksburg in 1985. He worked as a project manager in the Office of the University Architect and retired in 2007. All those who knew Bob well marveled at his ability to draw, design, create, and construct.

Weekends, vacations and retirement were often spent at the cabin, hiking, traveling to national parks, and visiting Cindy’s parents and friends in NC and beyond. Most recently Bob and Cindy went to Toronto to reunite, after 65 years, with two of the Vibank, SK, cousins finally located through genealogical research.

An open house will be held on Sunday July 8 at their home in Blacksburg from 1 to 4 PM.