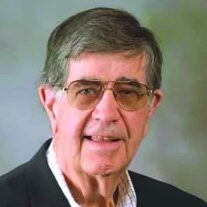 James Edward “Jim” Littlefield, 89, died at home, after a brief illness, September 9, 2021, under the care of CNRV Hospice. He was predeceased by his parents, Thomas Odell Littlefield and Helen Kuthan Mayberry.

Jim was a graduate (1950), of Washington High School (Massillion, Ohio) from which he was given an award in l992, as a “Most Distinguished Citizen”. He worked a variety of jobs, sometimes through the night, to attend college, and in 1954, obtained a B.S. from Kent State University. He earned a Masters in Business Administration, University of Chicago in l957; and a PhD at University of Wisconsin in 1967. His academic career began at University of North Carolina, Chapel Hill, where he taught in the Business School for seventeen years, or until 1984, when Virginia Tech’s Business School recruited him to head their Marketing Department.

A veteran of the U.S. Army, Jim’s love of traveling, as an instrument for learning about different cultures and business practices began when he was stationed in Germany in the 1950’s. At VA Tech, he was instrumental in the early championing of the study abroad experience, and led over 30 programs. This focus on International Marketing complemented his hope of broadening his students understanding of how others live and think. He was awarded the Alumni Award for Excellence in International Education In 2010, the year he retired, at age 78.

Jim’s community service efforts included 12 years as Affirmative Action Officer at UNC. In the summer months he focused on visiting businesses for the Consortium For Graduate Studies in Management, garnering donations for recruiting and supporting minority students. At VA Tech he served three years as Equal Opportunity Officer; also from 1973-84, he was a member of the Board of Directors and University Representative to the Consortium for Graduate Study in Management, St. Louis, which also raised funds and recruited minority students for the MBA Programs. After retiring he served on the Board of the (all volunteer) first Hospice of The New River Valley, Virginia. This was the year they were preparing to satisfy Virginia’s newly enacted licensing requirements. Also about that time he took up a hobby of collecting “retired” bicycles to be refurbished as gifts for folks, such as those recently released from prison, who needed something faster than two feet to get to work on time,

Jim was a member of The Unitarian Universalist Congregation of Blacksburg, Virginia where he had served as Trustee of the Board. He was also a Trustee on the Board for The Mountain, a UU Retreat Center. He and Bobbie loved taking workshops in caving, part of the nature program, where they experienced many of the underground marvels in this part of Virginia.

This past year, Jim did not let a day go by without expressing some form of gratitude: for his home at Warm Hearth Village, for those who visited with him, (in person or by phone), for his caregivers, his family, and even for Lisbet, the cat… who refused to sit on his lap.

His cremains will be placed in the Memorial Garden at the UU Congregation, in Blacksburg, where a memorial service will be scheduled at a later date.