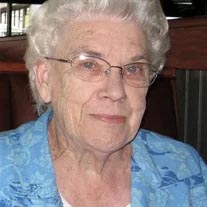 Thalia Conner Linkous, 92, peacefully left to be with her Lord on March 6, 2019. Her first husband, James Alton Conner, and her second husband, Burnett Marvell Linkous predeceased her.

Thalia lived her entire life in Alleghany Springs (Shawsville). She was a homebody yet maintained a lifelong curiosity about the world. She was a farmer alongside Alton for 20 years and then became assistant manager of the cafeteria at Shawsville High School until her retirement. In the summers, she managed the kitchen at Alta Mons Methodist Camp, where she was known not only for her good food but also as the instigator–and often recipient–of many practical jokes.

During her 60s, she reconnected with her childhood sweetheart, Marvell, and they married soon after. They often went camping together, and Thalia saw the ocean for the first–and only–time in her life. She did not care for it, she said. Moving water made her “swimmy-headed.”

She will be remembered by everyone as a woman who worked hard all of her life. She did all her chores at breakneck speed. She mowed her acre-plus yard with a push mower and always tried to beat her best time. Once, she sent a mower to a mechanic to be serviced, and he returned it to her with the words “wore out” written on the engine in black magic marker.

She was the oldest member (both in age and length of time) of Sowders Chapel Baptist Church, which her family founded at the turn of the 20th century. She was a devout woman. She had her devotions–scripture reading and prayer–in the morning with her coffee and before she retired at night. True to her faith, she was tolerant and open-hearted.

Thalia loved flowers and had a porch full. She was not above surreptitiously picking a slip off of a plant no matter where she found it. She loved her vegetable garden and kept a small patch of tomatoes and cucumbers until she was 90. She was impatient to see things grow and would often root around in the soil with her finger to see if a seed was sprouting.

She was a lot of fun, and we may miss that most. She had a quick wit, which was sometimes biting, but only in the most good-natured and hilarious way. We will miss the way her eyes grew large whenever she told a tall tale.

Thalia’s home will be open for visitation on Sunday, between 2:00 and 4:00. We hope you will come and tell your own tall tales about her. A graveside service will take place at Sunset Cemetery in Christiansburg, Va., on Monday at 3:00 p.m, with Pastor Lanny Belcher officiating. All her friends are welcome.

The family would like to offer special thanks to the folks at Medi Hospice, in particular Jamie Thompson and Marcia Haralson, and special gratitude to Thalia’s neighbors, Ila Jean Poff and Doug Poff for watching over her in her later years, and for helping us so much in the last two.

In lieu of flowers, please consider giving a donation in memory of Thalia to the Montgomery County Animal Shelter or St. Jude’s Children’s Hospital.