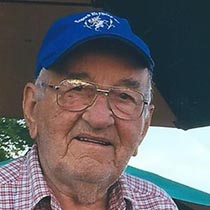 Melvin Donald (Pops) Linkous, 88, of Rich Creek, departed this life Tuesday afternoon, August 23, 2016, in the care of the Veterans Administration Medical Center in Salem. Born on December 26, 1927 in Pulaski County, he was a son of the late Richard Elliott and Josie Ann Duncan Linkous.

He was a Christian by faith, a veteran of the United States Army during the Korean War, a retiree of Celanese Plant at Narrows, and always a helpful neighbor.

He leaves to cherish his memory his devoted wife of fifty years, Eleanor Jeanie Scott Linkous; his daughters and sons-in-law, Tamela Yevette and Greg Hachey and Kimberly Dawn and Frank Mills, and Crystal Hope and Tommy Roberts; his grandchildren, Emily Jean Hachey, Alexis Marie Hachey, Rachel Nicole Mills and Jackson Thomas Mills; his brother, Douglas Linkous; and his sisters and brothers- in-law, Patricia and Allen Woodyard, and Phyllis and Harold Kirk; numerous nieces and nephews; and his beloved Corgi, Rainey Mae, who watched over him all the time.

Funeral Services will be conducted Friday at 1 p.m. in the Kendall Funeral Home, 605 Snidow St., Pembroke with burial following in Birchlawn Burial Park in Pearisburg. The family will receive friends at the funeral home one hour before the services. Following the services the family will gather at the home of Kim and Frank Mills on Brush Creek Road in Bozoo, W.Va.

In lieu of flowers the family suggests sending a memorial gift to “Cancer Kids and Christmas in care of Travis Sparks, 1815 Old Wolf Creek Road, Narrows, VA 24124. Online condolences may be sent by visiting kendallfuneralhome.com.