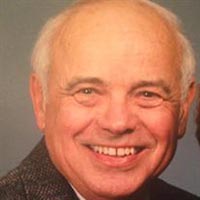 Harold Gray Linkous, 88, of Christiansburg, VA died peacefully, while surrounded by his beloved family on Saturday, August 8, 2015. Harold was the son of the late Lloyd G. Linkous and Nellie Mills Linkous.

He is also predeceased by his brothers Lloyd A. Linkous and Max H. Linkous and sister Mary Cynthia Graham. Surviving to cherish his memories are his wife, of 65 years Elizabeth (Betty) Atkinson Linkous, Son and daughter- in-law H. David and Brenda T Linkous and the apple of his eye, granddaughter Elena A Linkous, all of Christiansburg. Nieces, Cynthia (Cyndy) Graham (Christiansburg), Mary Lou Linkous Merkt, South Carolina) and Carol Graham Mangold (Arizona). Harold is also survived by his grand dogs Murphy and Saydi.

Harold is a member of the “Great Generation”. He served in the United States Navy in the Pacific Theatre during the latter part of World War II. He was always proud of his service and many times, upon hearing the naval song “Anchors Aweigh” would smile and say “Give me a pen and I’ll sign up again”. Upon returning home, he began a career with the United States Postal Service from which he retired 40 years later.

He served on the Christiansburg Town Council for 16 years before being elected mayor. He was Christiansburg’s longest serving mayor and held the position for 20 years before retiring. He proudly observed and oversaw numerous changes and tremendous growth in the town during his 20 year term. His management style was “put the right person in the position, then get out of the way and let them do their job”. Even though retired for 3 terms, many people continued to address him with a hardy “Hello Mayor”.

Of all of his many titles and accomplishments, he was proudest of his family and the titles of husband, dad, father-in-law, granddad, son, brother and uncle. He was always there for them and participated in every aspect of their lives. He loved to travel with Betty, his family trips to the Outer Banks where he spent many mornings and afternoons fishing on the pier and attending Virginia Tech football games. He also loved attending any function that involved his family members. He always loved family get togethers, especially if they involved food as well as visits from family and friends. Harold is loved and will be missed by many, but none more than his family who cherished him in life and will now cherish his memories.

Visitation will be held at Horne Funeral Home from 6:00 to 8:00pm on Monday August 10th. A celebration of Harold’s life will be held at Saint Paul’s United Methodist Church on Tuesday August 11 at 1:00pm. With the Reverend Paul Song and family friend Reverend Neal Turner officiating. In lieu of flowers, the family requests that donations be made to the Christiansburg Fire Department or the Montgomery County Humane Society.