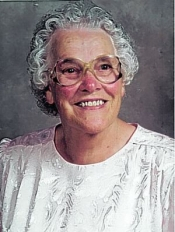 Edna Linkous, 93, of Merrimac, died Saturday, January 4, 2014 at Heritage Hall Health Care. She was born in Montgomery County, on May 26, 1920 to the late Guy and Carrie Linkous and was also preceded in death by her husband, Howard Essie Linkous, sister, Ernistine, half sister, Miligay, brother, Russel, half brothers, Lenwood, Terrell, and Warren. She was a life long member of the Merrimac Pentecostal Holiness Church and she served as secretary of the Sunday School and teacher for 29 years. She is survived by her daughter and son-in-law, Naomi “Sue” and Audrey Huffman of Christiansburg; sons and daughter-in-law, Howard Eugene “Gene” Linkous of Blacksburg, Lenwood “Woody” and Joan Linkous of Christiansburg; grandchildren, Doris and Rex Shelor, Geneva and Anthony Watson, Paula and Mike Hill, Amanda Linkous, Chance Linkous, Brooke Linkous, Erica and Jeremy Porterfield; great-grandchildren, Sophia Bugg, Masen and Miles Porterfield, Vivian Porterfield, Luke and Jordan Watson, Wesley and Daniel Hill. The family would like to thank the staff at Heritage Hall and all the people who helped with her care in her home. Funeral Services will be conducted Tuesday, January 7, 2014 at 1 p.m. in the Merrimac Pentecostal Holiness Church with the Rev. Jerry Sloss and the Rev. Larry Christopher officiating. Interment will follow in the Roselawn Memorial Gardens, Christiansburg. The family will receive friends from 6 to 8 p.m. Monday evening at the Merrimac Pentecostal Holiness Church, 894 Merrimac Road, Blacksburg. Arrangements by McCoy Funeral Home, Blacksburg.